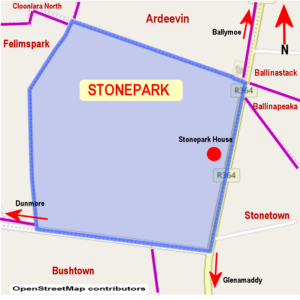 Stonepark (Leagan Gaeilge – Páirc na gCloch): The townland of Stonepark is situated 3.5 kilometres north of the town of Glenamaddy. It borders the Glenamaddy to Ballymoe road. The townland name is topographically based. The Irish version of the name may be translated as the field of the stones, páirc meaning field and cloch meaning stone. Other forms of the townland name mentioned in O’Donovan’s Field Name Books are Páirc Cloiche and Stone Park.
Distinctive Features:
• The field boundary dry-stone walls prevalent in Stonepark indicate the presence of limestone rock close to the surface of the ground. Stone walls were built after the great Famine of the 1840s when the open system of farming, known as the Rundale system, was replaced and the land redistributed. Stone walls not only defined field boundaries but also helped to clear them of obstacles which interfered with cultivation. Stone walls were relatively easy to build, having no foundations, and required little maintenance.
• The residence of local landlord, Malachy Keavney, was situated on the eastern side of the townland along the Ballymoe Road.
• In 1840 there were twelve houses in Stonepark mostly located in the south east corner close to a larger cluster of dwellings in the north west of Stonetown.
1656-58 Down Survey: The owner of Stonepark townland at the time of the Down Survey is listed as the Protestant Archbishop of Tuam. The Protestant Archbishop had been granted vast tracts of land across numerous townlands, primarily in Galway, Mayo and Roscommon.
1823 -1838 Tithe Applotment Books: Surviving documentation of the Tithe Applotment Books is in poor condition making it difficult, and in some cases impossible, to decipher the names of landholders. Stonepark is not specifically mentioned as a townland in the online version of Tithe Applotment Books. Stonetown and Ballinaglough (Irish version of Stonetown) are listed. It is possible that one of them encompasses Stonepark. In so far as it can be ascertained the Catholic landholders in the townlands concerned who paid the tithe (tax) levied to support the Established Church (Church of Ireland) were Pat Keaveny, John Brady, Edmond Geoghegan, James Murphy, Martin Fahey, John Jennings, James Burke and Edward Mannion. Protestant occupiers of agricultural holdings were exempt from this tax. Protestant occupiers of agricultural holdings were exempt from this tax.

Census Records: Population and Household data for the townland of Stonepark: