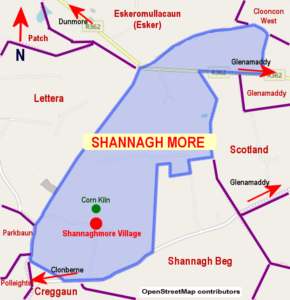 Shannagh More (Leagan Gaeilge – Seanach Mór): The townland of Shannagh More incorporating Parkroe and Stoolpark is situated to the west and south west of the town of Glenamaddy in north east County Galway. The southern boundary of Shannagh More is 3.5 kilometres south west of Glenamaddy while the northern boundary is less than one kilometre west of the town centre. John O’Donovan translated Shannaghmore as the great old field. Achadh and ach were Irish words used in the past to describe land, or a field. However, townland residents dispute that account and assert that the historic Irish form of the townland name is ‘Sean Áith Mór’ which translates as the ‘Large Old Limekiln”. Áith is an old Irish word for limekiln and it apparently evolved over time into ach which is not phonetically dissimilar, sean means old and mór means great/large/big. Limestone is close to the surface in Shannaghmore and would have provided an accessible, bountiful supply of raw material for the creation of lime. Other forms of the townland name are Shannaghmore, Shanagh, Shannaugh and Shannough.
Distinctive Features:
• The townland was noted for limekilns but their locations are not historically mapped.
• A Corn Mill is recorded near Shannaghmore Village in the 1840 Historic Ordnance Survey Map.
• There were sixty houses in Shannagh More in 1840, thirty of which were located in Shannaghmore Village in an extended cluster fitting the definition of a traditional clachan village in the south of the townland. Another cluster was located in Parkroe in the northern part of the townland with the remaining houses located in Stoolpark fronting the Glenamaddy to Tuam road and in the centre of the townland.
1656-58 Down Survey: The Down Survey name of the townland is given as Common and the owner as Sir Henry Slingsby. The area of unprofitable land in the townland amounted to 367 plantation acres while the profitable land came to 125 plantation acres. The 125 profitable acres were forfeited under the terms of the Cromwellian Act of Settlement. Protestants who supported the Royalist cause lost all, or, part of their lands having opposed Cromwell’s rise to power.

1823 – 1838 Tithe Applotment Books: Surviving documentation of the Tithe Applotment Books is in poor condition making it difficult, and in some cases impossible, to decipher the names of landholders. In so far as it can be ascertained the Catholic landholders in the townland of Shannagh More who paid the tithe (tax) levied to support the Established Church (Church of Ireland) were Pat King and Martin Conneely. Protestant occupiers of agricultural holdings were exempt from this tax.
1838 O’Donovan’s Field Name Books: O’Donovan described Shannagh More in the Field Name books as follows – “There are several portions of bog in various parts of the townlands, the road from Dunmore to Glannamadda passes from West to East through the North portion of this townland. There is a village called after the townland in the South portion. There are spring wells, gravel pits, sand pits and a lime stone quarry, the remainder of the land is tillage and pasture.”
1856 Griffith’s Valuation: The townland covers an area of 500 acres 0 rood 17 perches and the total rateable valuation of the land and buildings combined amounted to £145 17s 0d. At the time of Griffith’s Valuation there were forty three occupiers in the townland of Shannagh More – Coghlan (2), Collins, Cornelly (3), Donnellan (3), Fahy, Gibbons, Hopkins, Howard, Hussey (8), Jeffers (2), Keavany (4), Keeffe (6), Lannon, McGuire (3), Meahan, Rafterry, Raftery, Shee, King and Ganly. The landlord was Sir George Shee.

Census Records: Population and Household data for the townland of Shannagh More: