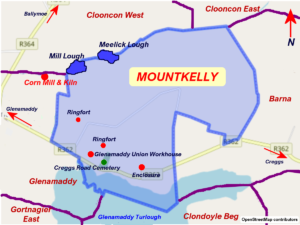 Mountkelly (Leagan Gaeilge – An Droim): The townland of Mountkelly is situated about one kilometre east of the town of Glenamaddy. Another historical form of the townland name is Mount Kelly. An Irish version of the name isn’t included in O’Donovan’s Field Name Books in 1837. When it came to recording the names of demesnes and big houses, the only authority sought by O’Donovan was that of the owner of the property. Druim, the old Irish name for Mountkelly, was probably allocated by the Cromwellians to Col. John Kelly in compensation for better lands confiscated elsewhere.  It is reasonable to assume that the townland was named after him. In olden times ‘druim’ and ‘droim’ were the Irish terms used to describe a ridge, or, a hill. Mount, a variation of mountain, was a term favoured by the owners of landed estates in 18th and 19th centuries. There are in excess of one hundred instances of the term being used to describe estates and houses featured in the Landed Estates Database.

In relation to Mountkelly Patrick Melvin states in The Landed Estates of County Galway that:

“In 1788 Dominick Browne of Kilskeagh and Ashford, parish of Cong, married Emily a granddaughter of John Browne of Westport, 1st Earl of Altamont. Their eldest son Robert Browne, Ranger of the Curragh, county Kildare, held lands in the parishes of Athenry and Lackagh, barony of Clare, county Galway in the 1850s. Their second son, John William Browne, was a Dublin solicitor, who acted as agent for the Marquess of Sligo’s county Galway estate. In 1846 J.W. Browne bought the lease of Mount Kelly estate in the parish of Boyounagh, barony of Ballymoe, from Henry Lanauze. Mount Kelly was part of the Marquess of Sligo’s estates leased to Christopher Kelly Bellew in the late 18th century and in 1800 to Lanauze. Hussey de Burgh records that Robert J. Browne owned over 2,000 acres in county Galway in the 1870s and James Browne of Mountkelly owned 1,905 acres.”

1656-58 Down Survey: The owner of Mountkelly at the time of the survey was Daniel Kennedy who was a Catholic. The survey established that the unprofitable land in the townland amounted to 439 acres and the profitable land was estimated to be 303 acres. The 303 acres were forfeited.

1823 – 1838 Tithe Applotment Books: Surviving documentation of the Tithe Applotment Books is in poor condition making it difficult, and in some cases impossible, to decipher the names of landholders. In so far as it can be ascertained the following Catholic landholders in the townland of Mountkelly paid the tithe (tax) levied to support the Established Church (Church of Irelad).  Kerins, Raftery (4), Griffin (2), Horan (2), O’Flynn (3), Saxon (2), Mulrooney (2), Dolan, Tracy and Morrisey.  Protestant occupiers of agricultural holdings were exempt from this tax.

1838 O’Donovan’s Field Name Books: O’Donovan describes the townland as follows – “Mount Kelly: A portion of Mill Lough and Meelick Lough which is on the N. boundary of this townland belongs to it. There is bog along the North and East boundaries. A portion of the South is a flooded Turlough. A road passes through the South portion. There are 2 Danish Forts. Lake View place is in the S.W. portion. The remainder of the land is tillage and pasture.  Mount Kelly is situated 1mile South of Clooncun Lough on the N. boundary of Clooncun West townland.”

1856 Griffith’s Valuation: The townland covers an area of 457 acres 2 roods and 16 perches and the total rateable valuation of the land and buildings combined amounted to £195 15s 0d. At the time of the survey there were 28 occupiers in the townland of Mountkelly – John W. Browne, the Union Workhouse and Land, the Guardians of the Poor of Glenamaddy Union, Reilly (2), Rafterry (5), Miscal (6), Fleming (3), Tiernan (2), Mee, Dowd, Moran, McGrath, McGuire, Mulryan and one unnamed occupier. The landlord was John W. Browne.

Census Records: Population and Household data for the townland of Mountkelly: