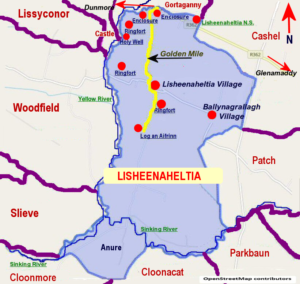 1834 Tithe Applotment Books: Surveying documentation on the Tithe Applotment Books is in poor condition making it difficult, and in some cases impossible to decipher the names of landholders. In so far as it can be ascertained the following landholders in Lisheenaheiltia paid the tithe (tax) levied to support the Established Church (Church of Ireland) – Mannion, Ward, Collins, Bradon, Connelly, Brennan, and other unidentifiable occupiers. Protestant occupiers of agricultural holdings were exempt from this tax.

1838 O’Donovan’s Field Name Books: O’Donovan describes the townland as follows – “There is a portion of bog in the South portion and along the West boundary of this townland. There are small portions of plantations in the N. portion. There are two villages not named. Centre of river forms a part of the S. boundary after which it crosses the South corner of the townland. The remainder of the land is tillage and pasture.” 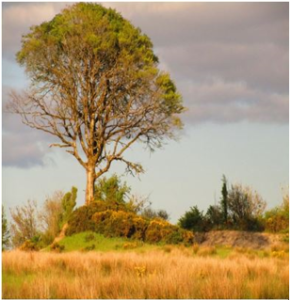 The Lios from which Lisheenaheltia derives its name was located in Martin Joe Mannion’s land on the road to Áth an Iúir. Lisheenaheltia has many important features including Ringforts, a holy well which is close to the East bank and a Mass tree, ‘Log An Aifrinn’, where Mass was celebrated during the penal days (1695 – 1778).  A Mass is celebrated each year at this spot in memory of all those who suffered during that difficult time in Irish history. Many priests and nuns came from the village also. Lisheenaheltia had lots of rich soil where deer from which it derives its name roamed freely in ancient times. It also has lime kilns.

Boyounagh (Buí Aibhneach) means yellow marshy or place by a river.  The Sinking River which rises at Gilmore’s Mill in Leitra flows through the south of the townland of Lisheenaheltia and is bridged at a place called Áth an Iúir (the ford of the yew tree). The Yellow River flows south from Meelick townland via Boyounagh and later joins the Sinking River. This then flows on to join the Dalgan River, later forming the Clare River which flows onwards to Lough Corrib.

The topography of Lisheenaheltia is undulating with a number of gravel eskers which are the deposits left from glacial meltwater at the end of the last ice age which occurred 10,000 years ago. Peat bogs are situated to the north and south of the farmland area. It would have been covered with a canopy of trees in pre-Christian times. The Early Christian period from about 500 AD onwards saw much clearing of woodland. Oak and Hazel were particularly used for the building of early ‘post and wattle ‘homes. Although little of the woods remain today there are still Oak, Holly, Ash and Whitethorn trees growing in the hedgerows.

There were clusters of ringforts in Lisheenaheltia during the early medieval period, dating 550 to 900 AD. It was said that if you stood in any one fort you could see another two.

Census Records: Population and Household data for the townland of Lisheenaheltia:

A Clachan Village in Lisheenaheltia

The Black and Tans

The Blessed Well in Lisheenaheltia