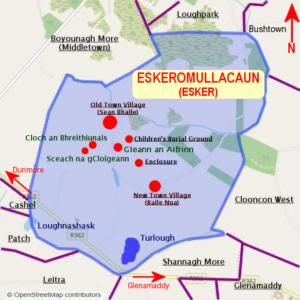 Eskeromullacaun (Leagan Gaeilge – Eiscir Uí Mhaolacháín): The townland of Eskeromullacaun is situated about two kilometres west of Glenamaddy Town in north-east County Galway. The townland is better known as Esker.  Other forms of the name are Eiscir O’Mhaolacáin and Eskeromeelaghan. O’Donovan in his Field Name Books translates the townland name as “O’Mullagan’s esker or ridge”. The Irish for esker is ‘eiscir’ and ‘omullacaun’ is the anglicised form of the Irish surname ‘Ó Maolacháin’ which means the son, or, descendant of an individual whose surname was Mulligan. The name is derived from the range of sand hills called Eskers which run from north to south bisecting the townland. The greater part of the townland lies north of the Glenamaddy to Tuam road with a small portion to the south.

1656-58 Down Survey: There is no information available for the townland of Eskeromullacaun in this survey.

1823 – 1838 Tithe Applotment Books: Surviving documentation of the Tithe Applotment Books is in poor condition making it difficult, and in some cases impossible, to decipher the names of landholders. In so far as it can be ascertained the following Catholic landholders in the townland of Eskeromullacaun paid the tithe (tax) levied to support the Established Church (Church of Ireland). Geraghty (2), Mannion, Canniff, Cunny (2), Cuniff. Protestant occupiers of agricultural holdings were exempt from this tax.

1838 O’Donovan’s Field Name Books: O’Donovan’s townland describes the townland as follows – “About 3/4 of this townland is bog interspersed through various parts of the townland. There are two small Loughs namely Esker Lough 51/2 chains N. of the T. boundary and Wind Hill Lough nearly in the centre of the townland in a bog. There are two villages called Old Town and Newtown. Esker Poulegarane is at the South end of Oldham [Unable to read.]. Esker village a portion of Lough na Shask which is on the N. boundary belongs to the townland. There is also a Turlough. A road crosses the [Unable to read.]. The remainder of the land is tillage and pasture. Eskeromullacaun is situated at the South boundary of this parish joining the parishes of Clonbern and Kilkerrin the former in the Barony of Ballymoe and the latter in the Barony of Tiaquin”.

1856 Griffith’s Valuation: The townland covers an area of 864 acres 3 roods and 20 perches and the total rateable valuation of the land and buildings combined amounted to £135 15s 0d. At the time of Griffith’s Valuation there were twenty three occupiers in Eskeromullacaun  –  Corneely, Mannion, McDonnell (Landlord), Burke, Cunniff (3), Donnellan (2), Giblin, Gannon (2), Connors, Keavany (2), Haverty, Geraghty (3), Comer, Hussey and Coghlan. The landlord was Martin McDonnell.

Whereas much of the townland has been reclaimed from cut-away bog and converted into productive grassland in the 20th century, there is still a portion of good quality bogland on the northern perimeter of the townland which keeps the home fires burning throughout the winter months. A number of Loughs appear on the Griffith Valuation Ordnance Survey map of Eskeromullacaun – Pollagarraun, so called after a gelding (gearrán) is reputed to have drowned there in olden times, retains water throughout the year. 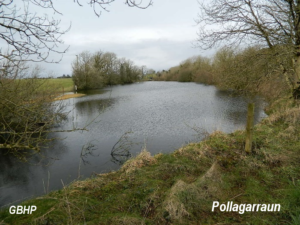 An overflow pipe was installed in recent years to take surplus water from the lough to a small river that disappears underground a stone’s throw from the townland boundary in a swallow-hole located in Boyounagh More (Middletown).

Esker Lough no longer exists. It was drained in the early part of the 20th century when the owner of the land in which the lough was situated, excavated a hole on its verge causing the water to soak into the depression. As the water receded great numbers of fish and eels could be seen wriggling in the thick black mud which had sealed the bottom of the lough. Windhill Lough which was located on the eastern side of the Esker hills no longer exists. Pollnashask is partly in Eskerromullacaun. It is called Loughnashask by O’Donovan in the 1834 Field Name Books and translated as Sedge Lough. It is located on the south side of the Dunmore Road. It retains water all year round and traditionally was a haven for otters and a safe nesting place for swans.  When the water table rises in winter it merges with Cashel turlough (Turlough Boyounagh) from whence it flows via a subterranean passage to Gilmore’s mill in Leitra.

The mill depended on a good flow of water to turn the mill wheel and could only operate at optimum efficiency when the water reached a certain level in Glenamaddy Turlough and Cashel Lake.

A small river which has its primary source in Loughpark meanders through the northern part of Esker before disappearing into the aforementioned swallow-hole in Middletown. 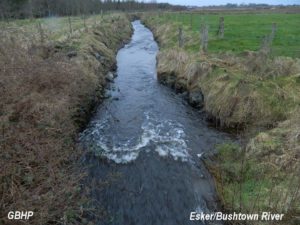 In the latter half of the 19th century Martin McDonnell, local Landlord, had the bright idea that he could divert the water from this river, before it reached the swallow-hole, to the Yellow River in Boyounagh with a view to increasing the flow of water that operated the mills he constructed at Boyounagh Bridge.

Having excavated a trench thirty metres long he discovered that the water soaked into the ground, forcing him to abandon the project. The outline of the abandoned trench can still be observed in the landscape adjacent to the small river which maintained its traditional course.

Census Records:  Population and Household data for the townland of Eskeromullacaun: