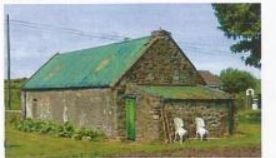 In the early nineteen hundreds Catherine Hughes was head of the Hughes family of Woodfield. She was a widow and a farmer who lived in a three bed-roomed house. This old house  can be seen today in the Scarry farm on the main Woodfield Road – at the Dunmore end of the Boyounagh Parish. The farm became a Scarry farm when a descendant of Catherine married Pat Scarry from Woodfield. The house is now a stable on the farm, as shown in the accompanying photograph. There is an extraordinary story to be told about the doorway to Catherine’s house. One night a knock came to the door and because 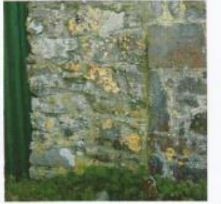 Catherine was a widow with young children, she was afraid to open the door. The next day a man-of-the-road was found dead in Glan Salach, an area at the bottom of Woodfield Road. After that every time the door was opened, a black shadow was to be seen outside the door. So, Catherine decided to block up the door and opened a new doorway alongside it. The photograph clearly confirms the existence of both doors.