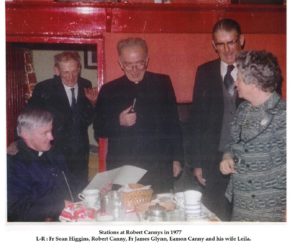 On one occasion when the Jesuit Missionaries were holding the Novena in Glenamaddy, Robert Canny of Lisheenaheltia hosted them for their mid-day dinner. Two Jesuits duly arrived at the appointed time and Robert was prepared for them having cooked two nice young cockerels for the occasion. He had set the table for three persons and showed the two priests their places. Robert placed a bowl of boiled potatoes, cabbage and carrots in the middle of the table. He then proceeded to take the cockerels from the pot, place them on a plate and put them on the table.

As Robert sat down to take his place the two priests leaned forward and took a cockerel each, together with a good helping of spuds and vegetables. All that was left for Robert was the spuds, cabbage and carrots and a bit of Country Butter. In Robert’s own words “The two boys did justice to the meat and left a pair of clean plates behind them”

A short time after the dinner, as Robert was showing them out the door, the Rhode Island Red Rooster flew up on the gate pillar and crowed as loud as he could. One of the missionaries turned to the other and said “that’s as proud a Rooster as you will ever see”, to which Robert replied, “so would you if you had two sons in the Jesuits”.