Home > Heritage > History > The Round Woodeen

The ringfort in Gannon’s field dates back to between 550- 900AD. It is a rare example of a Bivallate ringfort inhabited by a Lord, or Aire Forgill. Only 18% of Ireland’s ringforts are bivallate. The houses within the ringfort were thatched round houses of post and wattle construction with a central hearth sunken into the ground. The Lios belonged to a high status member of society. The ground within the fort on the Northwest side may indicate the former presence of a souterrain, or man-made tunnel, which would have been used for storage and as a refuge in times of attack. A few large stones containing lumps of white quartz are to be found on the inner ring. According to the old Irish law code the Aire Forgill generally owned 200 acres. He was allowed a house which was thirty feet and had a twenty foot outhouse. A bivallate ringfort was usually surrounded by a cluster of ringforts in the surrounding landscape. With an outer diameter of 55metres the Round Woodeen was certainly the home of an important member of the Tuath, or even a chief. There was also a ringfort behind O’Reilly’s old shop near Boyounagh Bridge, another behind Michael Conneally’s house and another near Long’s sheds on the Lisheenaheltia to Woodfield (Cuill-an-Chocla) road. 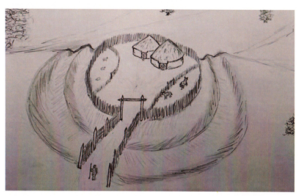