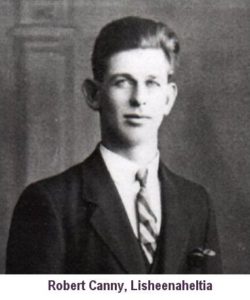 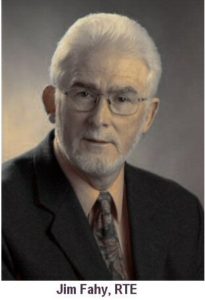 It seems that in and around the townland of Lisheenaheltia in particular, eight or nine miles from the Roscommon border, Irish was in very common usage up to the 1930s and this is something which linguists must surely find extremely interesting because this little island Gaeltacht is at least sixty miles from the main Connemara Gaeltacht in west Galway. Even today, there are a dozen or so native speakers in the area and they regularly get together for a bit of a céilí, or a cómhrá. One of the most unusual of this small band of Gaelgeoirí must surely be Robert Canny who was born in St. Louis but whose parents returned to Lisheenaheltia when he was five years of age.

Part of a programme first recorded in 1979 but which was subsequently lost. Ten years later, at the end of 1989, the tapes turned up once again and with them the historic memories of the last days of an east Galway Gaeltacht, or Irish-speaking area. This tiny enclave of native speakers at Glenamaddy, more than sixty miles from the nearest Gaeltacht in Connemara, survived into the 1960s but then went into rapid decline. Farmer and folklorist, Robert Canny, was one of the very last of that Irish-speaking community. This tape includes his memory of that period.

Jim Fahy:           Well Roibéard. We were talking there about people from this parish going to England forty, fifty, sixty years ago without having any English at all and the difficulties that presented for them. In those days were there very many people who didn’t speak English.

Robert Canny:  No. There wasn’t many  that  could only  speak  the Irish

Jim Fahy:          For those who couldn’t speak English it, obviously, presented many difficulties for them?

Robert Canny: Indeed, it did. Of course, they usually went with a neighbour, you see. Perhaps they might be sharing a shanty over there. The neighbour and I went you see. The neighbour could speak English fluently, but I didn’t know. I’d be able to manage by working with him and living with him, you see. If the farmer wanted him to do anything I could convey through the medium of English. He wouldn’t understand what the farmer was talking about.

Jim Fahy:          Robert. What is the official position of the Lisheenaheltia area then? Was it ever described as a Gaeltacht, or a Breac-Ghaeltacht?

Robert Canny: ‘Twas always as a Gaeltacht because when they were getting these donations. It’s through the Gaeltacht they got it for the youngsters at school, for composition or whatever. Whatever the competition was they got a prize.

Jim Fahy:             What stage did they cease? When was this area no longer regarded as a Breac-Ghaeltacht?

Robert Canny:  It would be in the early forties, during the war years.

Jim Fahy:           Was there any reaction to it at the time? You were, after all then, witnessing the death of a Gaeltacht when those grants were withdrawn and official recognition was withdrawn from you.

Jim Fahy:           Was there any strong opposition, or reaction that you can remember at the time, because it must have been something that people felt very strongly about?

Robert Canny:  No! No, not generally, you see. You’d get the odd people that did of course deplore that such a thing was happening.

Robert Canny:  No. None organised that I know of.

Jim Fahy:           Was Conradh na Gaeilge active at that time, or what organisations were involved in promoting Irish?

Robert Canny:  No. It was Lackadaisical. We formed a branch here in Glenamaddy. I know it fell through.

Jim Fahy:          Braitheann sé ar an aos óg. Do you believe that the young people of today are likely to take sufficient interest in the Irish language to revive it, or to, at least, make the country bilingual? How hopeful can you be about that?

Robert Canny: The parents of today. It’s dependant on them. The schools, and so on, have their part to play. The first class is, (at) leach a’ teallaigh, on the hearthstone. See, that breaking in of the child through the medium of love and then to depict his country for him.

Jim Fahy:          But there are many young people today who don’t see any real use in the Irish language. They would prefer to learn French, a continental language. How can you convince them it’s worthwhile making the effort to learn Irish, to speak Irish?

Robert Canny: Well! It’s the hallmark of nationhood. In the first place we cannot claim to be a nation if we haven’t a language.

Jim Fahy:          Of course, it’s easy for you to say that, looking back over a lifetime of seventy years and a long involvement with the history of the country, but for the young boy or girl growing up today who is impatient to get out and get involved in the Europe of today, it’s much more difficult, isn’t it?

Robert Canny: Oh! It is. But still if the will is there it can be done. I understand that in Germany they have to learn four languages and here we’re objecting to the two, that one is killing the other. You know with the families there are today for education, it should be no trouble at all to them to learn your French and learn your Irish too, because we didn’t have a chance in our days as what they have today.

Jim Fahy:          How big a disappointment for you is it that this isn’t still a Gaeltacht area? Would you like this Glenamaddy area close up to the Roscommon border, a small, isolated, rural community, would you like to see it as Fíor-Ghaeltacht, the same as Connemara, Kerry or Donegal?

Robert Canny: Yes. Of course, I would. I would.

Robert Canny: There’s no mistake about it. It’s a disappointment, because I believe it could be done.

Jim Fahy:          Robert. Isn’t there a real danger that Irish will die out with your generation?

Robert Canny: The danger is there, you see.

Jim Fahy:          Many people would say that you have some kind of a romantic pipedream when you talk about Irish being revived around Glenamaddy, sixty or seventy miles away from the nearest Gaeltacht, that it’s just not possible!

Rober Canny:  I believe that it is possible. If it was possible fifty years ago why can’t it be possible today?

Jim Fahy:         What would your wish be as far as the language is concerned here in Glenamaddy?

Robert Canny: Oh To hear everybody to speak the language, the language of their country first, the first language and then afterwards English or whatever you like afterwards. By all means, have our national (language), that’s our heritage. It’s up to us to preserve it. I don’t know what’s wrong but there’s something radically wrong that it should be dying.

Robert Canny died in 1980 and is buried in the Old Cemetery in Glenamaddy.

Glenamaddy Boyounagh Heritage Project Committee wishes to thank Jim Fahy and RTE for facilitating the online posting of this interview which constitutes a valued part of our parish cultural heritage.