Twenty six ringforts have been identified by the National Monuments Service in the parish of Glenamaddy. Some are in a good state of repair while others are at various stages of decay due to animal ingress and wear and tear. Since they are located on private property access would be subject to landowner permission. Their locations are noted on the accompanying parish map and many are also distinguishable on online satellite maps. 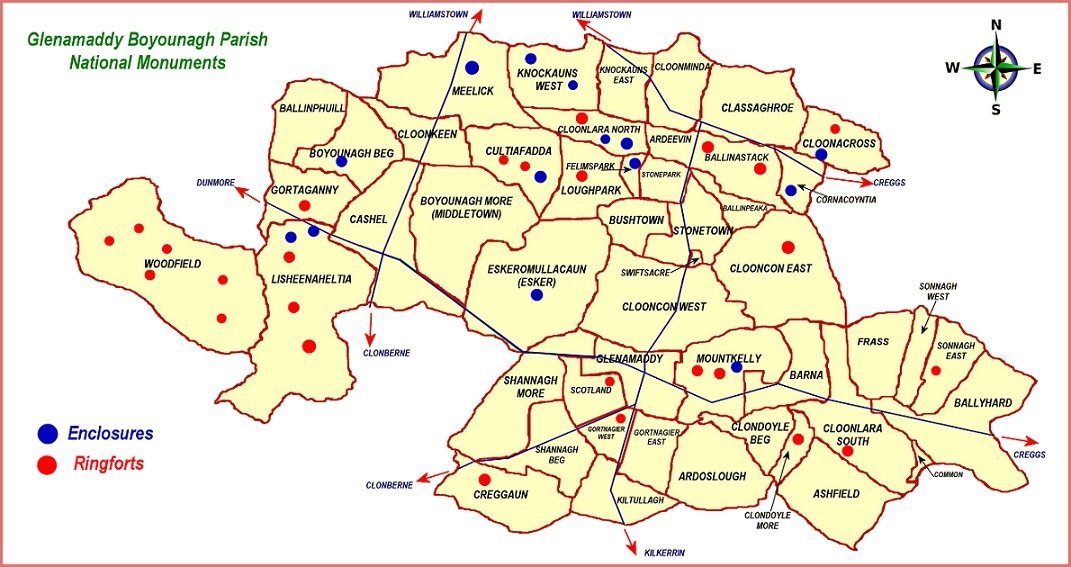 The building and occupation of ringforts extended over a very long period, from at least the Iron age until medieval times, during which a large proportion of the farming community used them. Erected as protected enclosures around farmsteads mainly during the Early Christian period (c. 500 – 1100 AD), they constitute the most common field monument in Ireland with c. 45,000 identified by the National Monument Service. Their remains are found in large numbers in every county in Ireland and are known by various names, including fort, rath, dún and lios. Many Irish townland names are derived from ancient ringforts. Ringforts are usually circular, with a diameter of between 20 and 60 metres and defined by an earthen bank formed by material thrown up from a ditch immediately outside the bank. A small proportion have two or more rings of protective banks and ditches and these are believed to have belonged to the upper echelons of society. A two-ringed fort known as a bivallate is to be found in Lisheenaheltia. The dwelling houses within the protected enclosures were generally circular thatched structures with post and wattle walls and a central hearth sunken into the ground. When the fire was lit the smoke escaped through a hole in the roof. Other timber buildings within ringforts were used to house animals or store grain. Ringforts were home to a whole array of activities, including weaving, leather working, corn drying and grinding, animal butchery and iron working.

It is believed that the purpose of a ringfort was to provide protection for a short period of time to the occupants and their livestock during ‘hit and run’ cattle raids. Inhabitants had a line of sight of other forts in the immediate vicinity so that in the event of a surprise attack help could be summoned. Cattle were a prized possession in ancient Ireland and it is not surprising that cattle raiding was prevalent. Many Irish roads were once cattle tracks, or ‘bóthair’. Upon the inauguration of a regional king, his followers expected him to lead them on a cattle raid to mark the occasion. In ancient Ireland, kings were given tribute in the form of cattle. The full name of Ireland’s famous High King, Brian Boru, was Brian Boruma, which means ‘Brian of the cattle tributes’, referring to the cattle gifts he received as a sign of homage. The more cattle you had in ancient Ireland, the more powerful you appeared and successful cattle raids were a means of gaining prestige as well as increasing wealth.

Ringforts were used as burial grounds for unbaptised infants and because of their otherworldly association it was believed that harm would come to anyone who deliberately damaged them. There are many references to ringforts in the 1937 Schools’ (Folklore) Collection submissions made by pupils attending Glenamaddy parish primary schools. Considered to be the dwelling places of fairies, people who approached them by night reported seeing unexplained lights and hearing strange music. Fairies taking on the form of hares and black cats in the vicinity of lioses were a common theme in submissions.

As can be gleaned from the accompanying map, fourteen enclosures have also been identified in the parish. They were circular, or oval enclosed areas ranging in diameter from 50m to over 100m defined by a broad earthen bank with a single entrance. They are believed to have been ceremonial/ritual monuments, dating back to the late Neolithic/Early Bronze Age.

Glenamaddy Boyounagh : Our People – Our Heritage