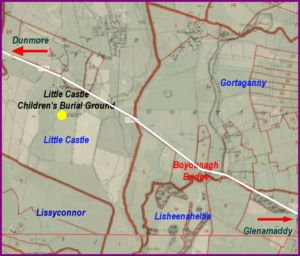 Situated in the village of Littlecastle, in the parish of Dunmore, lies the children’s burial ground known locally as “Falla Thobair”. Translated in English, “Falla Thobair” means “Well Wall”. Local knowledge hints that the name is associated with a well in the area that was surrounded by a wall. In fact, the well in question was originally located about 100 yards from where the burial ground lies. A river runs alongside the field that contains the burial ground and Littlecastle in a village that separates Dunmore from the parish of Glenamaddy.

The location of “Falla Thobair” is in-keeping with the national trend of Children’s Burial Grounds being found lying close to water, a well and also a townland boundary. It was believed that evil spirits of those that were laid to rest would not be able to cross over the water.

Children’s Burial Grounds date to as recent as the twentieth century. First appearing as far back as the 6th century, they occupy a rich place in Ireland’s Archaeological Heritage. Scattered across the country, they are largely concentrated in the West of Ireland. A Children’s Burial Ground refers to an unconsecrated and informal ground where babies who were stillborn or unbaptised, found their final place of rest. Religious tradition of the time forbade those who were unbaptised to be buried in church or consecrated ground. Thus, many were forced to undertake the lonely journey to places such as at “Falla Thobair” to lay to rest those that perished before baptism.

“Falla Thobair”, although located in the parish of Dunmore, contains the remains of children from the village of Boyounagh, Lisheenaheltia, Woodfield, Patch, Lissyconnor and Littlecastle. It is thought that few families in these areas escaped the sad loss of an infant, whether stillborn or who died shortly after birth. It has been reported that burials took place at dusk, under the shadow of darkness, to prevent locals discovering the unpleasant event. Bereaved parents mourned in silence and such passings of little children were not discussed further.

In 2001, a local group took to the task of tidying and cleaning “Falla Thobair”. Grass was cut, weeds were cleared and therein laid an abundance of stones, each one a marker to record the resting place of a child. Each stone was a visible reminder of a stone laid in silence and placed at dusk by a grieving parent.

A Mass was celebrated by Fr Flaherty of Dunmore and Fr Goaley from Glenamaddy. The Mass was attended by locals from all villages aforementioned. The ground was formally blessed, therefore now consecrated. All of the girls buried here were christened “Mary” and the boys were christened “Joseph”. At last, these forgotten angels were acknowledged and given some form of recognition and place.

Perhaps the most poignant memory of the blessing in 2001 was the fact that the Mass altar in “Falla Thobair”, on that day, was prepared by the last surviving parent known to have buried her child here during the 1940s.

In 2012 a decision was made by the Littlecastle Cemetery Committee to tidy up the burial ground a little more. A new fence and gate has now been erected. A cross marks the spot of the burial ground and a book placed at the back of the local church in Glenamaddy to allow locals from both Glenamaddy and Dunmore to enter memories, prayers or quotes.

In Loving Memory of all the Beautiful Children Laid to Rest in this Burial Ground.