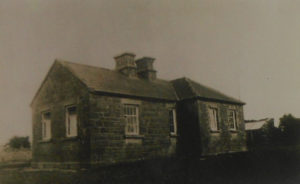 Clondoyle National School (which was actually in the townland of Cloonlara South) opened on January 20th 1879, having been in the planning and construction stage for about eight years. A survey of 1825 says that there was a school in ‘Ballyhurd’ but it is not mentioned in another survey taken in 1835. There is a tradition of a ‘Ballyhurd School’ but it had probably closed before ‘Cloondoyle’ came into being. I say this because many of the pupils enrolled at Cloondoyle on opening day were transferring from Gortnadeeve and Glenamaddy Schools. One hundred and fifty pupils enrolled on that day, many were of normal age for starting school, many more had attended other schools and a good many, aged up to ten or eleven years, had not attended any school. 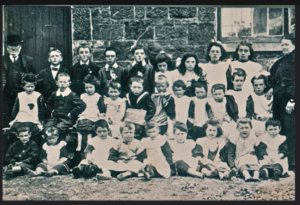 The first teachers were Daniel McCarthy (from Cork) and his wife Matilda (born in Dublin). Mr and Mrs McCarthy feature with pupils in the accompanying school photograph taken in 1910. The Teachers’ Residence (now Kathleen Concannon’s home) was built shortly after the school and the McCarthys occupied it up to their retirement in 19010. During this period an extension known as ‘the classroom’ was built in 1890, several other improvements were made to the building and several monitors were trained to become teachers. The next married couple of teachers were Mr. and Mrs Keegan. They were remembered for their emphasis on singing, music and Irish dancing, but they remained at Cloondoyle for only a few years. They were followed around 1915 by J. H. Gill from Scardaun, Co. Mayo and his Glenamaddy born wife, Ellen (nee Glynn, of what is now Comers Moving Pint). They reared seven children (the first children to live at the residence) and they remainded until 1958.

During the Gill era in 1943 a new school ‘Scoil Mhuire’ was built on a new site in the townland of Ballyhard, about a quarter of a mile further from Glenamaddy. The old building was demolished and it is believed that the stone was used in the building of O’Neill’s house opposite the church and the home of the late Mary Burke, Cloondoyle. Mr Gill taught at the new school up to his retirement in 1958 but Mrs. Gill moved to Lisheenaheltia in 1951. She was replaced at Cloondoyle by Maureen Lennon from Glinsk. Miss Lennon was replaced by Sara Jennings from Adregoole who stayed until 1960. Mr Gill was replaced in 1958 by the first lady principal, Patricia O’Brien, from Ballinamore Bridge. She was also the first principal who didn’t live locally and the residence was sold at this stage. Nuala Walsh from Ardeevin and Mrs. Tuohy from Co. May did short terms as assistant teachers in Mrs. O’Brien’s time. In 1962 past pupil, Mary Mulryan from Mountkelly, became principal and the assistants in her period were Joan Horgan from Cork, Miriam Corry from Kilsallagh, Ballymoe and Mary Raftery (later McHugh) from Kilkerrin. In 1968 Josephine Killalea (later Kelly) from Ballygar became principal and both she and Mary McHugh were moved to Glenamaddy School when the amalgamation took place. When the two second level schools opened in Glenamaddy in 1959 and 1963, pupils finished their primary education one to one and a half years before the traditional age of fourteen. This reduced numbers in Cloondoyle and when two families with school-going children moved to Tipperary in 1970, under the Land Commission Migration Scheme there was little hope of the school remaining open. There was a strong government policy at the time to close one and two teacher schools ad both the management and the parents seemed to think that amalgamation with Glenamaddy was the best option to them. In 1973 teachers and pupils moved to Glenamaddy and Cloondoyle School fell silent, having educated 1108 boys and girls in its ninety four years.

Footnote: The building was used as a furniture store for a time and then as a store for hardware before falling into a derelict state. It was tidied-up and painted by local people in preparation for a past-pupils reunion in 1995. A few years later it was reconstructed and became the offices of Glenamaddy Community Development company.