During the Penal Days of the 18th century, Catholics in Ireland were persecuted and barred from publicly practicing their faith. Following a series of catastrophic Catholic defeats at the Battle of the Boyne, Limerick, Athlone and Aughrim during 1690/91 the Irish Parliament, entirely made up of Protestants, enacted a raft of legislation designed to impoverish and subdue the Catholic population which constituted the majority. In excess of 80% of the land of Ireland was in Protestant hands by the end of the 17th century, with the Plantation of Ulster and the Cromwellian and Williamite confiscations contributing greatly to that figure. The decline in Catholic ownership continued apace under the Penal Laws so that by 1776 it is reckoned that only 3% of Ireland’s land was in the hands of Catholics and much of that was of inferior quality.  The Penal Laws were as much about power, status and property as religion and were used to consolidate the Protestant grip on the reins of power for the next two centuries. Very little effort was made to persuade or force Catholics to convert. The Ascendancy realised that their power and influence would be diminished if huge numbers of Catholics opted to become Protestants.

In 1695 Parliament passed laws denying Catholics access to education and removed the right of Catholics to bear arms. It was also made illegal for Catholic families to send their children abroad to be educated. In 1698 a law was passed directing bishops and members of religious orders to leave the country by 1st May of that year. As a result, 190 clergy sailed out of Galway, including the Augustinian friars who had a long-established abbey in Dunmore. Priests were not permitted to enter the country after 1st January 1704. This was to ensure that very few Catholic priests who provided temporal leadership as well as spiritual guidance to their flocks would be available to serve in the country after a generation had passed. Those within the country who wished to serve as priests were obliged to register with the authorities before June 24th 1704 and provide two sureties of £50 each, the equivalent of €12,000.00 each in today’s currency. 1,089 registered priests remained in Ireland to minister to the people, two third of whom were dead by 1723. When registering, priests had to provide details of their age, place of residence and where and by whom they were ordained. In 1704 two priests were registered for Boyounagh/Templetogher parish. Edmund Lyne (Lyons) aged 56, who lived in Meelick was ordained by Bishop Lynch in Clonbur in 1676 while John Concannon, aged 44, who lived in Barna was ordained in 1684 by Dr Dominic Burke at Athleague.  It is not known who provided their sureties. It is believed that Fr Lyons said Mass in Kilnalag and that Fr Concannon celebrated Mass at Esker/Middletown/Glenamaddy. By and large the new laws were ignored by Catholics.  Replacement priests came from Irish seminaries on the Continent of Europe to fill vacancies. Priests were also secretly ordained for the Tuam diocese by Bishop Francis Lynch at Clonbur. In order to avoid arrest priests and bishops lived with their families disguised as farm labourers.

In 1709 priests were required to take the Oath of Abjuration renouncing Catholic King James ll as the legitimate heir to the throne and swearing allegiance to Protestant King William lll and his lineage. No Catholic could in conscience take this oath. Failure to take the oath was to be treated as treasonable. Some priests were executed at this time for disobeying the Penal Laws but since the authorities were unable to universally enforce the law most were allowed to work quietly as long as they didn’t encourage people to rebel.

Priests could not legally be ordained in Ireland at this time. In 1715, a County Galway grand jury brought pressure to bear on the county sheriff to apprehend Fr Andrew Crean who had replaced Fr Concannon in Boyounagh/Templetogher parish on the grounds that he had entered the country illegally. When executing arrest warrants bailiffs had to thread carefully and were frequently forced to retreat as they encountered strong resistance and physical threats from communities. Priests were often warned in advance and advised to go into hiding and minister to their flocks at unseasonable hours. Bishops and priests lived all their lives in secrecy and poverty. Bishop James Lynch was forced into exile. He appointed two vicars general to administer the diocese in his absence, one of whom was Dr Francis Burke who lived as a farmer in Knockatangle, Tuam. Dr Burke died in 1723 and is buried in Clonbern Cemetery but there is no gravestone to mark his final resting place. In 1719 Parliament passed a law to have the letter “P” burned with a red-hot iron on the cheeks of practicing priests who refused to take the Oath of Abjuration. Other more brutal forms of physical mutilation were proposed by the Irish Parliament but failed to get the support of the British Parliament and were not enacted. The 1731 ‘Report on the State of Popery for Galway’ indicated that there were Catholic Mass houses in most parishes. Between seventy and eighty were accounted for, in addition to numerous private chapels, nine monasteries, three convents and thirty two Catholic schools. Catholic Mass houses were not permitted to have a spire or bell-tower. In 1745 the attempt to reinstate the Scottish Catholic Stuart pretender to the throne resulted in a fresh bout of persecution in Ireland. It wasn’t until the late 1770s when the Stuarts no longer posed a threat to the English monarchy that the Penal Laws in Ireland were gradually relaxed.

Divested of property rights, excluded from the political process and state employment and with no access to education the Catholic population clung to their religion with even greater determination and zeal during the Penal Laws. A belief system rooted in more than a millennium of religious practise wasn’t going to be easily suppressed. The physical presence of ruined monasteries, abbeys, churches and places of pilgrimage which permeated the countryside served as visual reminders to the native Irish that their individual, community and national identities were inextricably bound up with their cultural and spiritual heritage.

In the parish of Glenamaddy, historically known as Boyounagh, two sites have long been associated with the celebration of Mass in Penal Times, one at Log an Aifrinn in the townland of Lisheenaheltia and the other at Gleann an Aifrinn in the townland of Esker about four kilometers to the east. Both sites were located in secluded valleys surrounded by hills, many of which have been removed for road and house building over the years.

At the height of the Penal Laws when priest hunting was prevalent, tradition has it that priests visited both parish sites in disguise to celebrate Mass. A screen was erected in front of the altar so that members of the congregation would not have sight of the celebrant. Alternatively, priests wore veils. In that way, people attending Mass could truthfully swear an oath stating that they hadn’t seen a priest if interrogated by the authorities afterwards. It is said that a priest used to travel cross-country in disguise from Ballyhaunis to celebrate Mass. Priests posed as farm labourers, beggars and itinerant musicians. On one occasion it is believed that a priest visiting Boyounagh parish to celebrate Mass was betrayed by an informer. Despite the vigilance of sentries posted along the route Crown forces known as Redcoats were able to infiltrate the congregation. Tradition has it that the celebrant and those members of the congregation who were unable to flee were arrested and following a mock trial summarily executed. 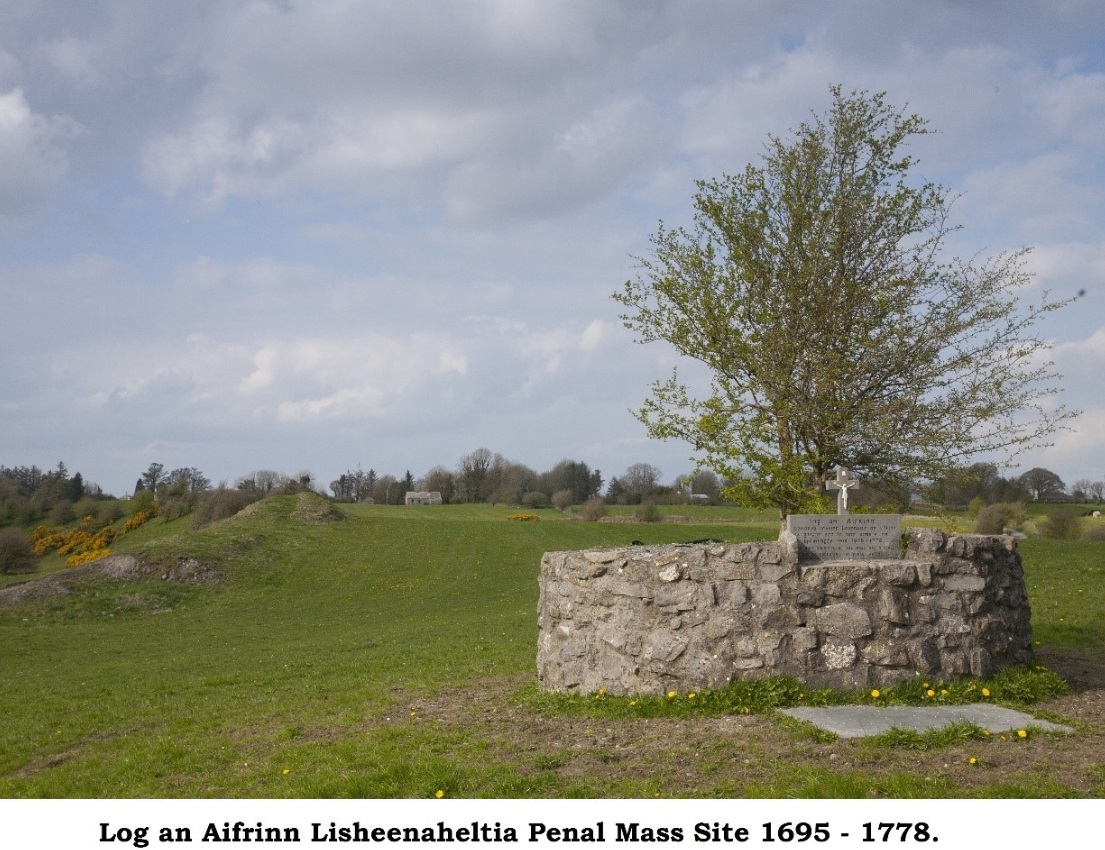 Log an Aifrinn, meaning The Place of Mass, Lisheenaheltia, has been sacred to local people down through the generations and great care has been taken to ensure that the sacrifices made by our ancestors in defence of their faith are not forgotten. Log an Aifrinn is maintained by residents of the townland and religious services are conducted there on a regular basis.

Over a hundred years ago a chalice and Mass bell were unearthed by a local farmer while ploughing a field adjacent to Log an Aifrinn. The chalice was presented to the then parish priest of Glenamaddy for safe keeping. Fr Walter Conway, an acknowledged Gaelic scholar and historian who was parish priest of Glenamaddy from 1896 to 1919, described the Mass bell as being “of global form and about two inches in diameter”. He mentioned that the discovery was made towards the end of the 19th century.

In an article published in the 1999 edition of Solas parish magazine, John Donlon, Esker, when reporting on a Millennium religious service conducted by Fr Michael Goaley P.P. at the site of the Children’s Burial Ground on a hillside in his native townland, referred to a bell which was believed to have been used when Mass was being celebrated in Gleann an Aifrinn in the distant past. “Fr Goaley unpacked his bag for Mass and one of the first items to emerge was the ‘Esker Bell’. Yes, it had made its way back to the site where it was used on those fateful occasions during penal days. Two hundred years had elapsed since the last group of people gathered on this hillside to celebrate Mass, yet many things remained the same, the same sacrifice to the same God, the hills, the bog, the river, the lough, the trees would have changed but little during this time.”

In a submission to the 1937 Schools’ Folklore Collection, Thomas Ward, a senior pupil in Lisheenaheltia Boys’ National School, on foot of information he received from Walter Finnegan, aged 79 years, identified the ploughman who made the discovery as James Slattery.

In the 1930s when the Board of Works was resurfacing a local ‘Togher’, Martin Keaveny, Esker, detected part of a black candlestick in a load of sand which had its origins in the sandhills close to Gleann an Aifrinn. He retrieved it and had it in his possession until the 1960s, at which point, he loaned it to Glenamaddy N.S. to be used as an exhibit in the school’s local history display cabinet. It is believed that it may have been used during the celebration of Mass at Gleann an Aifrinn in Penal Times and that its dark colour may be attributed to the practice at the time of overpainting brass objects to prevent the bright metal glistening in the sunshine and attracting the attention of Crown forces. The sandhills which surrounded ‘Gleann an Aifrinn’ have been partially removed, though locals can pinpoint the location. A Monumental Structure associated with ‘Gleann an Aifrinn’ known as ‘Cloch an Bhreithiúnais’ is visible in an adjacent field. It is located on private property and access would require the landowner’s permission. Its location is marked on the ‘Historic Environment Viewer’ map. The accompanying National Monuments Service description attributes the massacre which is alleged to have taken place in Esker to Cromwellian forces which predates the oft-quoted official commencement date of the Penal Laws by almost half a century. The fact that Cromwell had a deep antipathy towards the Catholic religion and was determined to exact revenge for the 1641 Catholic uprising lends some credence to this hypothesis.

The official national Monuments Service description is as follows: “In undulating grassland. Known locally as ‘Cloch an Bhreithínis’ (Judgement Stone), it consists of a large rectangular recumbent limestone boulder, L.2.1M, W 2M, H. 0.06 M. During Cromwellian times, people who were caught attending Mass in a nearby valley were tried here and if found guilty were hanged from a tree to SW.”

History of the Parish of Boyounagh. Patrick Knight

The Catholics of Ireland Under the Penal Laws in the 18th Century. Patrick Francis Moran