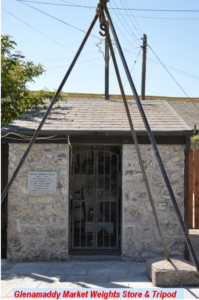 Glenamaddy has seen many improvements in its appearance in the past few years and the most recent is the restoration of the Market Weights Store located by the tripod at the square.  The Market Weights Store was built around 1900 and was used to house the different weights and measures required to weigh farm produce at the tripod on market days.  Indeed, some elderly people can recall it being in use during their lifetimes.  However, over the years it had fallen in to disrepair and of late had appeared as an eyesore at the centre of the town.
The Glenamaddy Town Enhancement Committee set about obtaining funding for the restoration of the Weights Store earlier this year and they were awarded a generous grant from The Heritage Council of Ireland for this purpose.  The committee were fortunate in finding local contractor, Frank Meehan, to restore this building with such sensitive attention to its heritage value.
Galway County Council provided funding towards the stone plaque located at the front where the expert craftsmanship of local stonemason, Paul Murphy, is evident.
The newly restored building is intended to house memorabilia of historic interest with the theme of market day in Glenamaddy which will be available for all to see through the new iron door.
This project took place with the kind permission of Kathleen (née Fahy) and Ann Mooney.
Author: Gearóid Garvey
Source: Solas 2008 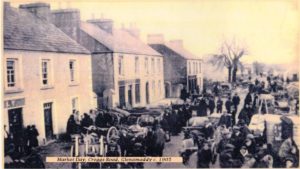 A Registry of Deeds memorial confirms that Patrick Reilly signed a lease with Rev. Thomas Lanauze for the rights to operate Glan/Glanamadda Public Crane in 1846. Patrick Reilly’s headstone inscription in Glenamaddy Old Cemetery reveals that he died in 1857.

The Fahy family from Church Street later had the sole weighing rights for the area on market days. Pat Fahy owned the Market Weights Store and the adjacent Tripod which was used to weigh grain, potatoes, pigs, fowl etc. People eager to ascertain the weight of produce on Market Days used the facility for a fee, typically 3d (old pence) per sack of potatoes or oats and pro rata for items of greater or lesser value,  as no alternative public weighing service was permitted under licence.

Outdoor markets were once a very common feature of Irish towns. Kathleen Quinn who came to work as a draper’s assistant in Martin B. Collins’ shop in 1938 recalled her memories of market day in Glenamaddy during World War 2 –“Market day was a very special day in Glenamaddy during the war years. Farm produce such as potatoes, cereal and turnips were sold at the Square on market day. For three weeks before Christmas there was also a fowl market held where buyers came from adjoining towns to purchase produce for the Christmas table. All produce was weighed and the relics of the weighbridge are still to be seen at the Square”. A well-known local character known as ‘Pencil’ was employed to supervise the weighing process. He was so-called having spent some time in Pennsylvania, USA, in his youth. Markets were held on Wednesdays and during Spring cabbage plants and suck calves procured in the south of Ireland were on sale. Glenamaddy market flourished for over a century, having been in existence long before fairs were introduced in 1888. It played an important role in the commercial life of the town and surrounding area and brought people together of different social backgrounds.  Changing times saw a gradual fall-off in the need for a regular market in the town and as result a local event which in its heyday was a hive of commercial and social activity gradually went into decline in the late 1960s.

A platform scale was located separately along the kerbside on the Kilkerrin Road, close to the Square beside Fallon’s premises. Carts laden with produce, too cumbersome for the Tripod to handle, were placed on the platform. A mechanism using a beam was located in a nearby building to record the weights of contents. This building was damaged by Hurricane Debbie in 1961 but the platform is still visible on the roadside today.
Author: Pat Keaveny
Sources:
Glenamaddy Arts and Historical Journal Vol 3-1993
Glenamaddy Boyounagh – Our People : Our Heritage. 2018
Registry of Deeds, Henrietta Street, Dublin 1