John Mee, a native of Cashel and Boston, sponsored the erection of the Marian Shrine at Cashel Cross in 1960. He suggested the idea to the late Pat Gannon on one of his regular visits home from the United States as they discussed the felling of the Big Bush of Cashel in 1943. He thought it would be a great location for a Shrine to Our Lady. Pat who owned the land adjoining the crossroads to the north west was willing to donate a site. Upon returning to Boston, John contacted emigrants and collected donations to bring the project to fruition. His brother Tom who resided in Cashel organised a committee which met in his house.  In due course the Shrine was built by a contractor from Moylough. John Mee died shortly afterwards. In the meantime Tom and Eileen Hennelly and later Mary Theresa Comer looked after the Shrine. Some time later Canon Michael Goaley suggested to the committee that a cover be built to protect the statue. There wasn’t sufficient money left in the fund to carry out the proposed work so the matter was put on hold. Once more the Mee family came to the rescue and made funds available to complete the proposed upgrade. In 1966 Patrick Lohan from Ballyhard was commissioned to carry out the modification. Archbishop Michael Neary blessed the remodelled Shrine in December 1996. The Mee family continued to donate money for the upkeep of the Shrine. Local residents maintain the Shrine in good condition and assemble there to recite the Rosary during the Month of May. 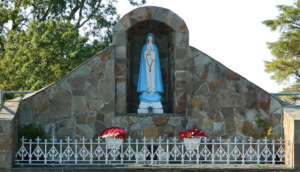