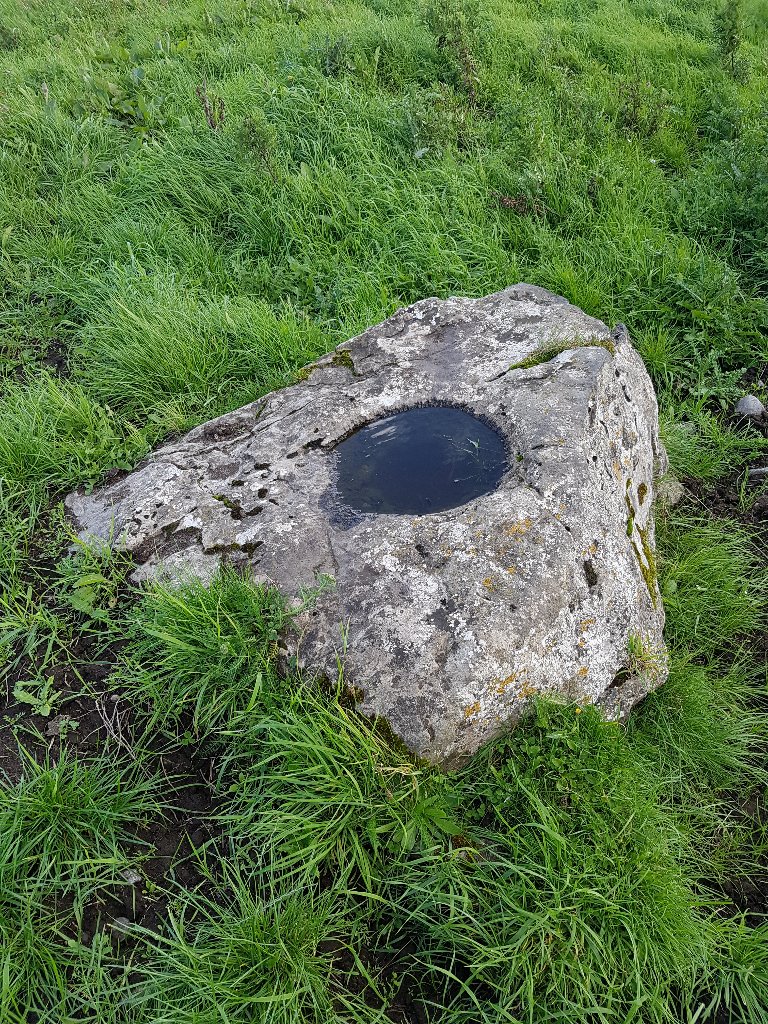 A fine example of a bullaun is to be found about 22 metres east of Boyounagh Old Cemetery boundary wall and 45 metres directly east of the medieval church which was perched on the summit of the old graveyard. It may be observed from the old graveyard but a close-up study would require the permission of the landowner in whose land it is located. Situated in the townland of Cashel, it is a sizeable limestone bolder, probably a glacial deposit, resting on a ridge which may have accommodated a pathway to the early and medieval church. Circular in shape, the hollow measures 18 inches across. The inside is smooth and regular and shaped like a bowl, reaching a depth of 6 inches at the deepest point in the centre. It has a capacity of c. 5 litres when filled to the brim.

The term ‘bullaun’ is closely related to ‘bowl’, a water container, and describes the depression in a stone which is usually filled with water. In Christian times bullauns would have had religious significance being used as holy water fonts. They may have been visited for cures or for petitioning good fortune. The rainwater that accumulates in them was said to have curative powers for warts or other similar ailments. It is open to question as to whether or not they were man-made or formed by natural erosion or a combination of both. It has been suggested that they were used in the forging of metal, particularly iron. The circular motion of pebbles used for cures and curses may have contributed to their smooth bowl-like shape. Either way, they were endowed with magical properties and probably date back to Neolithic times similar to the Megalithic Tombs. In the 6th century, church authorities decided to “expel all those whom they may see performing before certain stones, things which have no relation with the ceremonies of the Church”.  The edict doesn’t seem to have had the desired effect as folk customs relating to cures and curses continued.

The use of bullauns as fonts, or holy wells, doesn’t explain their original purpose which is probably pre-Christian. Some contained pebbles and folk traditions identified such pebbles as ‘cursing’ stones. If you wanted to put a curse on someone, you turned the stone anti-clockwise in the morning. However, the curse had to be ‘just,’ otherwise it rebounded on yourself in the evening.

The Boyounagh cemetery bullaun may have been used in pagan worship with perhaps offerings of milk or grain deposited in the bowl. Its original use may have been for grinding corn, taking on religious significance in Christian times. It was strongly believed that misfortune would befall anyone implicated in its removal.

Whether this bullaun was functional, associated with religious customs, benign or sinister we do not know but the one thing we do know for certain is that, like other Neolithic monuments, this enduring relic from the distant past remains intriguing and mysterious.