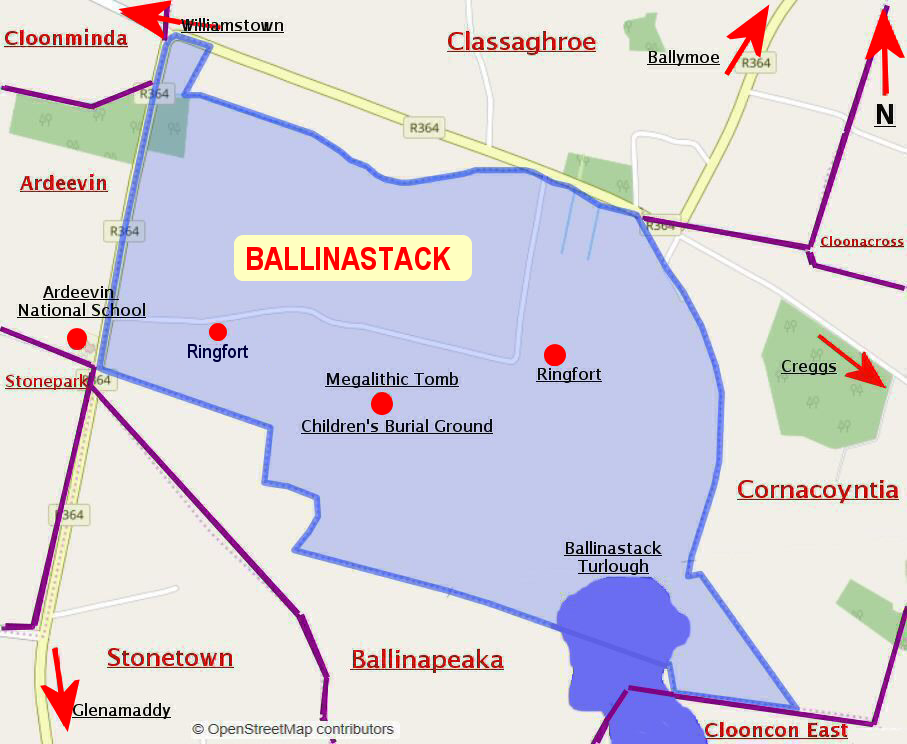 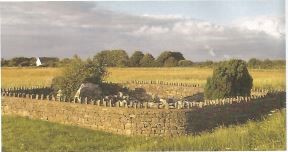 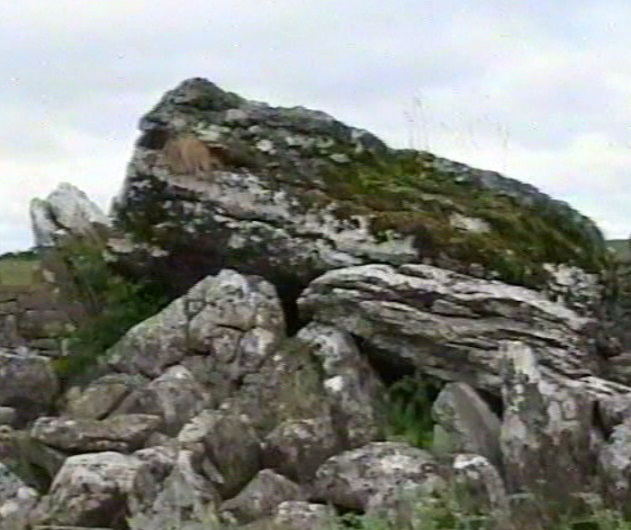 “The earliest evidence of human habitation in the locality is a Megalithic Tomb in the townland of Ballinastack about four miles to the north of Glenamaddy. Situated in a very large, undulating, sloping pasture field, it is a single chambered megalithic tomb with traces of a cairn on the north west side. The tomb faces north north east. It is likely that the material used in the construction of the tomb was obtained from the quarry north east of it.  The capstone consists of a large irregular stone, similar to those visible in the quarry. The side stones have been displaced due to the collapsing of the capstone. There are traces of double walling on the north west side of the tomb. This tomb possibly dates to Neolithic times (4,000 – 2,500 B.C.)”.

The monument is located on private property about four hundred metres from the nearest public road with access requiring the landowner’s permission. The megalith may have been used as a burial site, for ceremonial purposes, as a territorial marker or a combination of the three. The depression in the ground close to the north east of the Megalith is the likely source of the capstone.  Tradition has it that this distinctive monument marks the burial place of a local chieftain called Diarmaid. In ancient times unexplained phenomena were often linked to the superhuman feats of mythical warriors. A local legend attributes the large stone to the Fianna warrior, Diarmuid, of Diarmuid and Gráinne fame, who was exhibiting his unrivalled ability at stone throwing from Mount Mary which is visible on the horizon to the east.  An alternative folklore account tells how an angry giant flung the megalith from Mount Mary after a vanquished adversary fleeing westward following an altercation. In Christian times the site around it was used as a burial ground for unbaptised children with the last known burial taking place in the early 1960s. In recent years a stock-proof stone wall has been constructed to preserve the integrity of the site.

In the “Archaeological Inventory of County Galway Vol 2”, compiled by Alcock, de hÓra and Gosling in 1999, Ballinastack Megalithic Tomb is described as being “located on a tract of flat land in an area of gently sloping pasture. The tomb is incorporated in a circular cairn which has been reused as a CBG. A large roofstone rests above a collapsed chamber, aligned E-W, represented by at least four stones.”

The majority of such monuments are believed to have been constructed as burial chambers for individuals of high social rank. Dolmens may have been originally covered with earth which, with the passage of time, became eroded to expose the structures we see today. A view has been expressed that they were not covered but were meant to be admired as they stood in stark contrast to the impermanent dwellings of the local community. There is evidence that in some instances the interred remains of individuals placed in dolmen burial chambers were covered with stones up to the capstone which, over time, were removed and used in the construction of walls and buildings.

One can only marvel at the engineering skills of those who erected such monuments without having access to the heavy lifting gear available today. The construction of a dolmen involved the placement of a large slab or ‘capstone’ on top of three or more upright stones. The mystery remains as to how the builders mastered the technology to raise such heavy weights. There is evidence that enormous stone slabs used in the construction of some impressive monuments in Neolithic times were transported long distances on rafts and manoeuvred on dry land by people and oxen using a combination of ropes, levers, wooden rollers, and grease. Some capstones were glacier deposits while others, quarried from surface bedrock, were erected close to where they had been excavated. If necessary, the undersides of capstones were flattened using hammerstones so that they would balance safely on the weight-bearing upright supporting side stones. The absence of inscriptions or hieroglyphs creates formidable challenges when it comes to determining their exact original function and precise date of construction. Dolmens built in locations where their capstones were quarried could be erected in situ without posing the additional challenge of transporting heavy slabs of stone to distant locations. One method of construction may have been to raise one end of the capstone a few inches with levers and place wedges of stone or timber underneath. The builders could then lever up the other side and put more wedges under it. Repeating this process would slowly elevate the capstone until it was in the right position. The supporting side stones could then be positioned before removing the wedges.  Another method may have been to drag the capstone on rollers up a clay ramp and place it directly on top of the side stones which would have been embedded in the ramp. The clay could be removed if necessary. Whatever the method of construction and regardless of their original purpose, we can only marvel at the durability of Megalithic Tombs and the ingenuity of the people who built them with primitive tools and simple technology as they cleared and shaped the land that sustained them and which we have come to inherit.