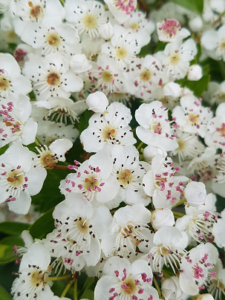 The flowering hawthorn (sceach gheal/whitethorn) is a breath-taking spectacle in May and June as hedgerows all over Ireland come alive with an array of eye-catching blossoms competing for our attention. Across the landscape, a profusion of white and, occasionally, pink flower clusters joyfully proclaim that summer has well and truly arrived. Traditionally associated with fertility and paradoxically, death, this hardy, long-lived plant is host to a great variety of insect species making it an important part of the ecosystem at a time when land-based insects are disappearing globally at an estimated rate of one percent every year.

Listowel Writers’ Week festival celebrates its golden jubilee in 2020. At the inaugural symposium convened towards the end of May 1970 author and teacher, Brian McMahon, referred to the sense of wonder which creation incites and the inspiration it provides for poets and writers. He spoke of the beauty of the month of May and singled out the spectacular hawthorn blossoms which are on view all around us. Describing it as the ‘annual miracle of the year’, he exhorted his audience to take time out to appreciate it.

Tradition has it that the morning dew from the hawthorn tree possessed special qualities on May Day and washing faces with it was believed to be beauty-enhancing, as the nursery rhyme attests:

“The fair maiden who, the first of May,

Goes to the fields at the break of day

And washes in dew from the Hawthorn tree

Will ever after handsome be”.

Though the tree which is inextricably bound up with our natural and cultural heritage now begins to flower around the middle of the month, it flowered closer to the Bealtaine festival before the adoption of the Gregorian calendar in the British Isles in 1752. Sometimes called the May Tree, it is the only plant which is named after the month in which it blooms. Stand-alone hawthorn trees were said to be gateways to the Fairy Underworld through which kidnapped humans entered. It was believed that cutting down or damaging such trees, even where they formed obstructions, could incur the wrath of the ‘Síogaí’ who congregated there. Far-fetched as it might appear, a report in the Irish Times in May 1999 described how a hawthorn bush that lay in the path of a proposed motorway bypass in County Clare was spared after folklorist, Eddie Lenihan, intervened and warned planners that its removal would result in motorway fatalities. He maintained that the tree in question was the rendezvous for fairies from Munster as they prepared to do battle with their counterparts in Connacht. Rather than tempt fate an alternative route was found.

Lest it strike you down

For if you take an axe to it

You’ll rue that you were born

Using the blossoms for decorations outside was considered acceptable, but there was a very strong taboo against bringing hawthorn into houses, perhaps, because its unpleasant flower scent was associated with medieval plagues.

Hawthorns are synonymous with hedges and are virtually stock-proof when managed properly. The word ‘haw’ is derived from ‘hage’, Old English for ‘hedge’. 200,000 miles of hawthorn hedging is said to have been planted in the British Isles between 1750 and 1850 under Enclosure Acts to delineate the boundaries of individual holdings created from commonages. As hawthorns are reputed to survive for up to 400 years, some of the saplings planted back then still survive as mature trees providing physical evidence of historical settlements. Recognising its ecological benefits, the European Union grant-aids its plantation in hedgerows thus ensuring secure nesting sites for small birds and a welcome wildlife food supply at the back end of the year.

Freckled nest-eggs you shall see

Hatching in the hawthorn tree

Quiet on her mossy nest.

The Celts marked Bealtaine, the beginning of the half year of light, with a festival and surrounded it with superstitions which coexisted with or evolved into Christian practice in later years. The Celtic Tree Calendar divided the year into thirteen lunar segments, each representing a native tree with the Hawthorn Moon covering the period 13 May to 9 June. The Ogham symbol for Huath, represented by H, is symbolic of the Hawthorn tree.

Legends surrounding the hawthorn exist in many cultures. The most famous hawthorn is the Holy Thorn of Glastonbury which was vandalised in 2010. According to legend, Joseph of Arimathea, the uncle of the Virgin Mary, arrived at a hill overlooking Glastonbury with a few disciples and vessels containing the blood and sweat of Jesus. He stuck his staff into the ground where it allegedly sprouted and grew into a thorn tree.  According to Welsh legend, the White Goddess of the Hawthorn once walked the empty universe and her white trail of hawthorn petals became the Milky Way. The hawthorn flowers represent the bridal gown of the young Goddess.  In Arabic culture, hawthorn has been long associated with death and was used in funeral pyres. This may have been because fire fuelled by hawthorn burns extremely hot. 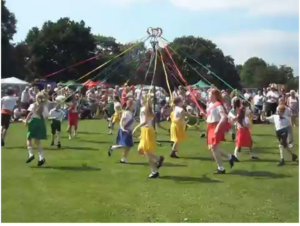 Maypoles were traditionally living hawthorn trees, brought into villages throughout Europe and danced around in order to bring life, love and fertility to a community.  “Children in County Wexford erect a large hawthorn tree on the fair-green or in some enclosed place and decorate it with candles, flowers and coloured papers. They then select a child as “Queen of the May” and they dance and sing songs in her honour around the May-Bush. It is then carried in procession through the streets and sometimes money is collected with which to provide a feast for themselves that night. Each school usually has its own “May-Bush”. (National Folklore Collections)

Love and respect for this plant was cultivated by Christians as Jesus’ crown of thorns was said to be a wreath of hawthorn and the Burning Bush seen by Moses was a hawthorn. Like many superstitions it could be considered sacred or cursed depending on one’s beliefs. At one point it becomes the tree of misfortune and bad luck, prompting marriages not to take place in May as it was considered unlucky to tie the knot in the hawthorn month. 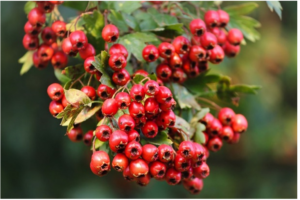 Hawthorn has many uses, it polishes well, and was often used for fine woodwork like cabinet making as well as being widely used in the making of walking sticks and tool handles. Haws are used to produce an assortment of jellies, jams, wines and liquors and its use as a tonic goes back to the first century in Rome.

Siegfried Sassoon, the celebrated British war poet nostalgically longed for a fleeting glance at the flowering hawthorn in his native countryside when pinned down by enemy fire in the trenches during the First World War.

Not much to me is yonder lane

Where I go every day:

But when there’s been a shower of rain

I know my lad that’s out in France

With fearsome things to see

Would give his eyes for just one glance

At our white hawthorn tree.

Percy French ‘loved to ramble down the old boreen when the hawthorn blossoms are in bloom’, while recently deceased Irish poet, Eavan Boland, depicts the Hawthorn as a tree surrounded by superstitions serving as a marker in the landscape for the guidance of travellers. 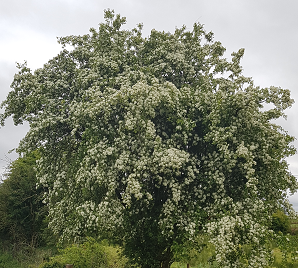 White Hawthorn in the West of Ireland
I drove West
in the season between seasons.
I left behind suburban gardens.
Lawnmowers.  Small talk.

Under low skies, past splashes of coltsfoot,
I assumed
the hard shyness of Atlantic light
and the superstitious aura of hawthorn.

All I wanted then was to fill my arms with
sharp flowers,
to seem from a distance, to be part of
that ivory, downhill rush.  But I knew,

I had always known,
the custom was
not to touch hawthorn.
Not to bring it indoors for the sake of

the luck
such constraint would forfeit–
a child might die, perhaps, or an unexplained
fever speckle heifers.  So I left it

stirring on those hills
with a fluency
only water has.  And, like water, able
to redefine land.  And free to seem to be–

for anglers,
and for travellers astray in
the unmarked lights of a May dusk–
the only language spoken in those parts.

The National Folklore Collections contain numerous references to the supernatural powers which our forebears attributed to the hawthorn tree reflecting the extent to which superstitions were part of the community belief system in the past. The following representative extracts are taken from material submitted by primary school children as part of the 1937 Schools’ Folklore Collection Project:

Steeped in myth and mystery the hawthorn features prominently in legend and folklore.  Whereas its supernatural reputation may have waned in post-superstition Ireland, its visual allure and environmental merits remain untarnished.  Enjoy the annual wild and wonderful hawthorn flower show starring ‘blossoms the fairest’, lending credence to the notion that the best things in life are free.