Lough Lurgeen Bog, a substantial portion of which is situated in the townland of Ashfield, contains the second largest area of intact raised bog surface in Ireland. It covers an area of 1,600 acres with extensive areas still intact. The surface of the bog is generally in good condition with little serious disturbance recently, apart from some limited peripheral cutting and afforestation. 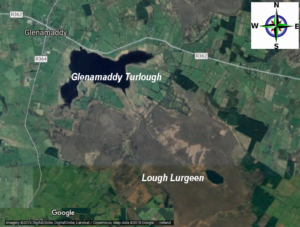 There is a small lake called Lough Lurgeen with a surface area of about 18 acres located on the bog at the south eastern end that is linked to Glenamaddy Turlough by an out-flowing river. The peat-bottomed lake in the middle of the raised bog area is a unique feature. This lake is supplied by water which percolates in from the surrounding bog. The water leaves the lake via a long, narrow outlet channel which flows to the north-west, eventually entering the turlough basin. Swallow holes are to be found to the east of the lake indicating the course of underground streams. Willow bushes mark the position of these swallow holes. The close hydrological linkages between the raised bog, lake and turlough are considered to have resulted in a unique ecosystem of high conservation value. The area has attracted Special Conservation Area status and is considered an important habitat for specialist flora and fauna at regional, national and EU levels.

The vegetation of the high bog supports a wide range of vegetation including ling heather, bog cotton, deer grass and sphagnum moss. The following bird species are associated with the bog though it must be said that some of them are on the verge of extinction – curlew, red grouse, lapwing, snipe, kestrel, mallard, white-fronted goose, skylark, meadow pipit and cuckoo. Some of these depend on other neighbouring habitats such as open water bodies and wet grassland for breeding and feeding. Just a few species including meadow pipit, skylark, curlew and red grouse complete their full breeding cycle on the bog with the first two species being the most common species occurring. Regrettably red grouse and curlew have declined significantly on raised bogs in recent times and are now on the endangered list.

Acidic, waterlogged and exposed conditions make expansive raised bogs an unattractive habitat for animal life. As a consequence, they are relatively poor both in terms of species diversity and population densities. Many species are opportunists, vagrant or temporary rather than specialists, but nonetheless they have an important impact on the ecosystem. Raised bog is an unsuitable habitat for many vertebrates due to the lack of available foraging and suitable breeding places. The Irish hare is the only mammal commonly occurring. Foxes and pygmy shrews are regular visitors while eels and otters have been sighted in the lake. Among the reptiles and amphibians that share the conservation habitat are the disparagingly named common frog and the common lizard. Last but not least, heath butterflies, dragonflies, water striders, moths and bog grasshoppers complete the residents’ inventory.