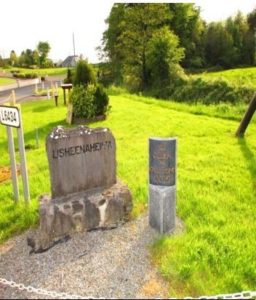 The golden Mile is an initiative which encourages rural communities to enter a mile long stretch of road in their local area into a county-wide competition. It is then assessed in relation to natural and built heritage, community effort and road safety.

The idea of creating a Lisheen Golden Mile began to take shape last year following a heritage walk around the village. Zena Hoctor, a heritage officer with Galway County Council, commented on the importance of the historical sites around Lisheen, as well as its natural beauty. And so were sown the first seeds of interest within the community.

The first task was to identify an exact mile. The road from Boyounagh Bridge to the Mass Tree at Log an Aifrinn was chosen because it takes in a number of historical features, as well as wide variety of flora and fauna.

Families and landowners along the Golden Mile were eager to help with the project, as well as neighbours around the townland. A team of young and not-so-young volunteers came out in force to carry out the work required to improve the mile and ensure that it was looking its best for the competition. Many a summer evening you would find a team of workers in high-vis jackets making improvements along the mile and possibly enjoying a treat or two for their efforts!

Signs were made, erected and painted; native species of trees and flowers were planted; hedges and ditches were trimmed to improve visibility; gates and walls were fixed up and painted; a fairy door magically appeared on an old tree by the river; a family tree with the names of the residents was created and displayed along the way, old tyres were painted and transformed into flower beds.. The work was endless but spirits remained high!

The Lisheen Golden Mile team wanted to highlight areas of interest along the way- the focal points along the route. The first of these is close to the start of the Golden Mile at Boyounagh Bridge. There you will find a small wooded area which is home not only to a wild fowl sanctuary, but also to Lisheen’s very own fairy door and a couple of tyre swings which give a great bird’s eye view of the river!

Next is the “Round Woodeen” which is a double walled (bi-vallate) ringfort in Gannon’s field. This is particularly rare and reputedly one of the best preserved in the county. Bivallate ringforts typically date from between 550 and 900AD. Close to the ringfort and river lays the Blessed Well – historically a place of pilgrimage and prayer, particularly on Good Friday. It is said that ribbons or holy objects were hung from the tree overhanging the Blessed Well – a tradition that dates back to Celtic times.

Further along the route is the “Clachan Village”- a dense cluster of small cottages that shared the surrounding farmland in Lisheen. These clachan settlement patterns were a feature of the landscape in late medieval Ireland and continued up until the 19th century. The Poirse Gabha (Blacksmiths Lane) runs through this clachan village, and the golden mile continues its meandering route towards the Mass Tree at Log an Aifrinn. This Penal Mass site dates back to the 1690’s and is an appropriate focal point for the Lisheen Golden Mile, as for many generations the people of Lisheen have celebrated mass at Log an Aifrinn- the hollow of the Mass.

One of the best aspects of the project was seeing the older generation pass on local history to young children, telling them about old traditions and place names as they worked side by side. To test them on their knowledge of the Golden Mile, a treasure hunt took place after all the work had been carried out. Treats were hidden along the way and the children who lived along or close to the route had to solve clues to find them. There were lots of tired but happy children that evening!

Lisheen already has a tradition for working together on heritage projects. Log an Aifrinn has been carefully restored and maintained for many years now by the community. It is important to carry on this work for generations to come. We are still awaiting the judge’s verdict on the work that was carried out this year, but regardless of the outcome, we are proud of the community effort that went into creating the Lisheen Golden Mile.

Many thanks to all who helped out in any way- Brosnans, Comers, Comers (Patch), Conneallys, Gannons, Ganleys, Geoghegans, Longs, Mannions and Wards. We hope you take this time to walk along and enjoy our beautiful Golden Mile! 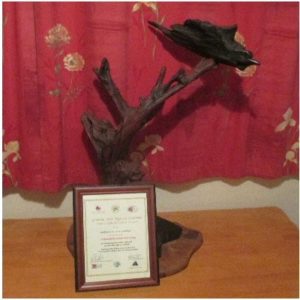 In December 2015 Lisheenaheiltia won the Golden Mile of Co Galway, an initiative which encourages rural communities to enter a mile long stretch of road in their local area in a country-wide competition.  Log an Aifrinn has been carefully restored and maintained for many years by the community. So, it was a great surprise when Lisheenaheiltia was named overall winners of the Golden Mile of Galway 2015. We held a Golden Mile Walk in conjunction with National Heritage week and we had a large crowd in attendance. We walked the mile and spoke about the above featured sites after which we all met at Lisheenaheltia for tea and refreshments.